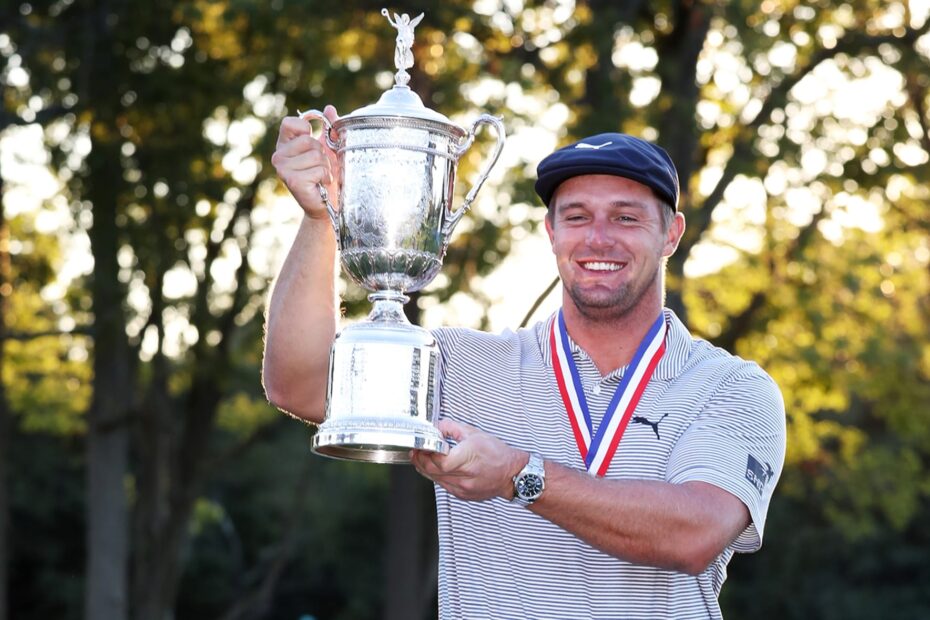 He signs his name left-handed and backwards.

He occasionally streams on the gaming site Twitch under the username “thebadone23.”

And as of Sunday, he is only the third man in history to win the NCAA Division 1 title, US Amateur Championship, and the US Open after Jack Nicklaus and Tiger Woods.

Bryson DeChambeau, a collegiate physics major, always sought out the science behind the science behind the golf swing. Prior to college, he dissected the mechanical nature of the swing in The Golfing Machine, written in 1969 by Homer Bailey, and picked up some of the arms extended natural motion from Mo Norman. Taking inspiration from geometric theory, the idea behind taking the club back on a single plane with no break in the wrist is designed to make more consistent contact through impact.  His extensive analytical approach and unorthodox methods likely scared off many college coaches before deciding on SMU, where he went on to win the NCAA Individual Championship

On the PGA Tour, it wasn’t difficult to notice DeChambeau’s extensive analytical approach. Showing early promise, Bryson earned five victories over a 16-month span from July 16, 2017 to November 4, 2018.  Despite success, DeChambeau absorbed criticism, but continued to embrace his unique style of play.

Some admire DeChambeau’s approach while others call it outright blasphemy, as some quirks like his uniform iron length have made some completely stop communicating with him. Further criticism of his approach has been that it saps power compared to traditional golf swings. But DeChambeau had a clear answer the naysayers on that issue, adding 20 pounds of muscle between the end of 2019 and the COVID-19 pandemic, and yet another 20 during the extra time off this spring.  He came back looking more like an NFL linebacker or bodybuilder than a PGA Tour player. Again, DeChambeau was doing things his way, ignoring those that claim weightlifting is detrimental to the golf swing.

Everyone took notice of DeChambeau weeks prior to the U.S. Open, not only for his physical transformation, but his stellar play. He captured six-straight finishes in the top-eight heading into Winged Foot, including  a 4th place finish at the 2020 PGA Championship.

At a very difficult venue at the 120th U.S. Open, DeChambeau overpowered the course, disregarding the potential hazards of the rough. He entered the final round two shots back of Matthew Wolff at three-under par. After a dazzling final round of 67, DeChambeau was the only player under par for the round and the tournament, easily taking down Wolff by six-strokes.  In doing so, DeChambeau joined arguably the top two players in the history of the game, Jack Nicklaus and Tiger Woods, as the only players to win the NCAA Individual Championship, U.S. Open, and U.S. Amateur.

Certainly this validates his approach on a major level, but one must wonder how many players will go to DeChambeau’s extremes. For example, players could follow Tiger Woods’ lead when he pioneered building his physical strength as an athlete, however, DeChambeau has taken every facet of his training to a far more polarizing dimension.

Naysayers may still think of DeChambeau as a one-hit wonder and point out that his body won’t last the long haul with such an unorthodox approach. However, there are many golf Hall-of-Famers with “only” a single major and at age 27, DeChambeau should be among the top players in the world with numerous opportunities to increase his major win total. We can only dream of what aspect of golf he will upend next.

For now, one key lesson that golfers of all skill levels can learn from DeChambeau is to have the courage to do things your own way. Just because your swing doesn’t come out of traditional methods or golf manuals, doesn’t mean it can’t work.  Ignore the doubters and play your own game.  If being your own person is good enough for the number five player in the world, it’s good enough for the average weekend player at the local public course.

Will DeChambeau be the player that turned the PGA Tour into a sport full of sabermetric bodybuilders? Perhaps not, but players will have to at least be more mindful of their methods than ever before or risk falling behind and becoming obsolete.

Exclusive deals, offers, and be the first to know about what’s happening in the world of SportsTrace.